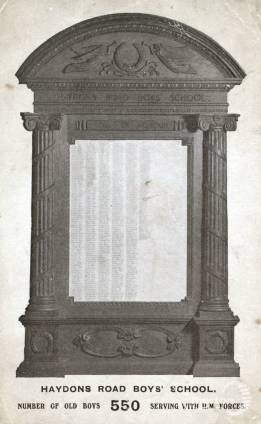 The Roll of Honour at the Haydons Road Boys' School, Wimbledon.

With the outbreak of war in 1914, a strong sense of patriotism and national pride led a generation of young men to volunteer for the armed forces. The curriculum at many local schools included some form of military exercise and hundreds of ex-pupils became servicemen.

This impressive plaque, records the names of 550 "Old Boys" recruited from just this one school.