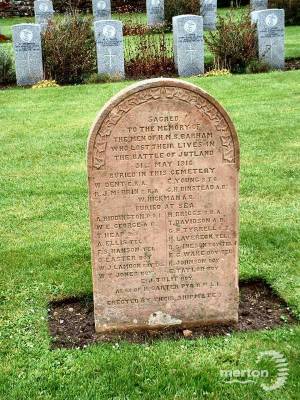 Charles was born in Wimbledon on the 26th of May, 1899, the son of Henry Robert and Mary Ann Easter. He lived in a five room house at 106 Haydons Road with his parents and eleven siblings. His father was a boot maker and his elder sisters made electric filaments.

Charles was 5’7”, with dark hair and eyes, plus a fair complexion. He worked as a laundry boy prior to enlisting in the Navy, then served on a number of ships including the Ganges, Impregnable, Vernon, and Warspite. During the Battle of Jutland, he was serving on HMS Barham. The ship was hit by a number of enemy shells, including one that exploded in the sick bay, killing everyone inside. Twenty six men died on the Barham that day, including eight ship’s boys – Charles was one of them.