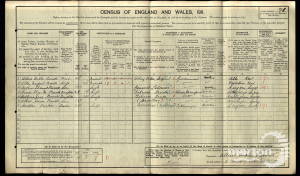 1911 Census for the family of Frederick Parker detailing the names of his half brothers and sisters. Century Road was later considered to be one of the worst kept roads in the area, but the family, headed by Frederick's stepfather Police Sergeant Herbert Bowels, later moved to more upmarket accommodation at Wandle Villa. This is a large property in the Phipps Bridge area, now owned by the National Trust. At the time of the census, Frederick was serving with the army.