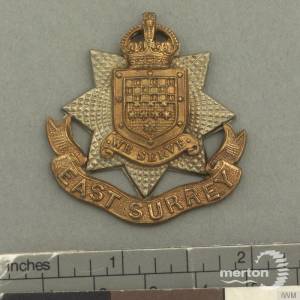 An eight-pointed Garter star, the topmost point displaced by an Imperial (King's) crown. The crown is resting on a shield bearing the Arms of Guildford (ie: the castle of Guildford with a lion couchant in front of the castle and a woolpack on either side). Below is a scroll inscribed 'East Surrey'. Star and castle in white metal, remainder gilding metal. A pair of lugs on the reverse.