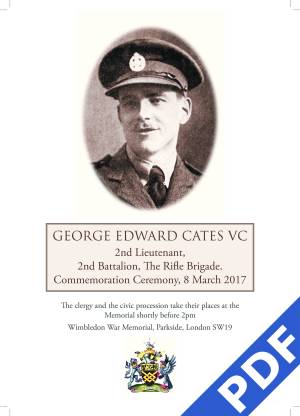 As part of the UK Government First World War centenary programme, specially commissioned commemorative paving stones have been installed throughout the country to mark the birthplaces of Victoria Cross recipients. Two VCs were born in Merton, George Edward Cates and William Allison White.

Cates was born at 86 Hartfield Road, Wimbledon in 1892. To mark 100 years since the act of valour for which he was awarded a Victoria Cross, a special commemorative event was held at Wimbledon War Memorial, Parkside on 8 March 2017. This combined hymns, speeches, readings and acts of remembrance, in addition to the unveiling of a commemorative paving stone.