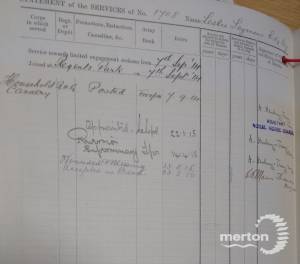 This page of Leslie Seymour Edgley's service record shows his date of enlistment, as well as his temporary promotion to the rank of Lance Corporal - he reverted back to the rank of Trooper a few months later, as he was now "supernumerary" (surplus to needs). It also shows the date he was wounded and reported missing, and when he was finally declared dead.