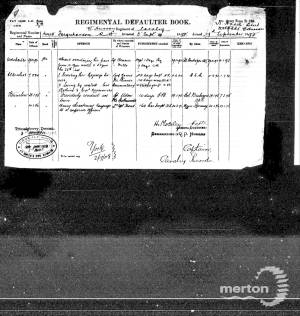 This page of Harry Farquharson's service papers, taken from his first term of service which lasted from 1892-1902, lists his numerous disciplinary offences, all from his first four years in the military. These included overstaying a pass, losing clothing, disorderly conduct, using threatening language towards a superior officer, and most seriously of all, desertion. However, he was sent off to India in 1896, and after this his behaviour seemed to improve, as there are no further offences listed.