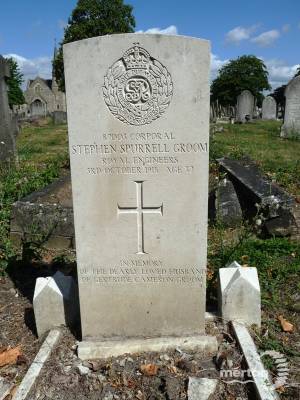 Stephen Spurrell Groom was the second son of Alfred Stephen Groom and his wife Sarah, daughter of William Spurrell of Carmarthen. They lived at 56 Gap Road Wimbledon and Stephen was born in Streatham on 7 March 1878. He was educated at Dulwich College and on leaving there trained as an architect, being, for sometime, a draghtsman in H.M. Office of Works. He married Gertrude Russell daughter of Cameron Russell of 63. Compton Road Wimbledon at Horsell Parish Church, near Woking, on 29 June 1907. Their daughter Isolda was born on 18 November 1908.
He joined the RE as a draughtsman to the Field Company in March 1915 but sadly died of heart failure while training at Chisledon Camp near Swindon on 3 October 1915.
His Commanding Officer, Major Herbert Minshall, wrote to his widow: "When you sent your husband to help his country, the possibility of his giving up his life must have crossed your mind. That he has done so before crossing to France does not alter the fact that he has died in his country's service. We miss him in various ways. His quiet efficient ways I, as his Commanding Officer, much appreciated. His gentleness was what made him popular with his collegues and men."