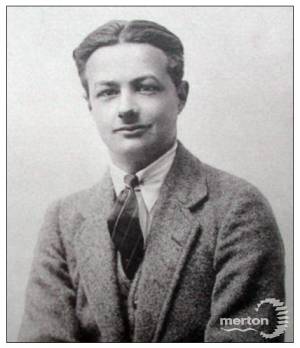 Herbert Grundtvig, a naturalised Brazilian solicitor married Norah Forde on 17 April 1895 in St Mary’s Church, Wimbledon and their only child, Humphrey Halgrim Grundtvig was born the following year on 24 July.

The family were financially comfortable and the 1901 census shows that they lived in Maidstone House, Epsom and employed a cook and a housekeeper.

Humphrey was educated at Suffield Park School and at Harrow. While at Harrow, aged only 14, he boarded at “The Druries” in Harrow on the Hill.

He entered the Inns of Court OTC at Lincolns Inn Fields on 6 October 1914, aged 19 years and 3 months. He was 5 feet 9½ inches tall, had a 35½ inch chest with a 3 inch expansion, and weighed 136lbs. He had 6/12 vision in both eyes without his glasses and 6/6 with them. He was gazetted to the Berkshire Regiment in October 1914, serving as a Private from joining up until he took up his commission on 25 November.

He was sent to the front on 14 May 1916 and transferred to the Leicestershire Regiment (Pioneers) D company on 30 June 1916. In August 1916 he was invalided home suffering from Trench Fever. His convalescence took several months and it was not until the end of the year that he was fit enough for light duties and it was March 1917 before he could return to his regiment.

His name appears in the 'Supplement to the London Gazette, 1 January, 1918', announcing his award of the Military Cross in the 1918 New Year Honours list for his conduct when a truck of ammunition on a light railway was derailed and set on fire by a shell. He and a colleague, who received the DCM, quietly collected a few men and unloaded the truck under great personal danger.

On 21 March 1918 Humphrey’s Division was holding the line around Lagnicourt, about 12 miles west of Cambrai. He was shot in the back and died on 22 March 1918 from his wounds. He was buried in Grevillers British Cemetery, grave II A 15, west of Baupaume.

Probate was granted to his father in September 1918 and his effects were valued at £276 5s.