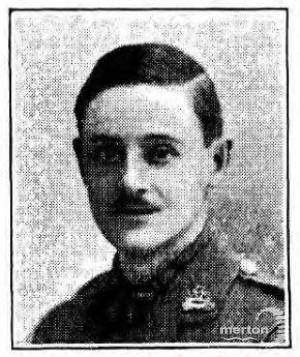 2nd Lt Hales was the son of William Henry Hales and Florence (nee Hersee) Hales of Wimbledon. He was educated at Kings College School Wimbledon, where he was a Corporal in the Officer Training Corps and went to London University and where he passed his final Law exams in June 1914.
He enlisted into the Norfolk Regiment on 31 August 1914 and obtained his commission in March 1915.
He married Athol Daisy Harris at Holy Trinity Church Wimbledon on 27 April 1915. His wife was five years his senior and the daughter of a Gentleman.
Shortly after the wedding he was sent to France with the Expeditionary Force and took part in the Somme attack of July 1916. He was killed in action on 24 October 1916 during a night attack between Gueudecourt and St Boeufs and was buried in the Sunken Road Cemetery.
His Captain wrote to his wife "He was killed while leading his company in a night attack. He died perfectly consciously and without pain". His Colonel wrote "He was killed while most gallantly leading his men. He was an excellent officer in every way and I could ill afford to lose him. He is buried on the Battlefield."

In the War Diary of 2nd Royal Berkshire Regt William Hales’ death is recorded in the entry for 23 October 1916. He died leading his Company in a night attack, and is buried in the Sunken Road Cemetery between Le Transloy and Les Boeufs. The war diary can be found in The Royal Gloucestershire Berkshire and Wiltshire Regimental Museum in Salisbury, Wiltshire.