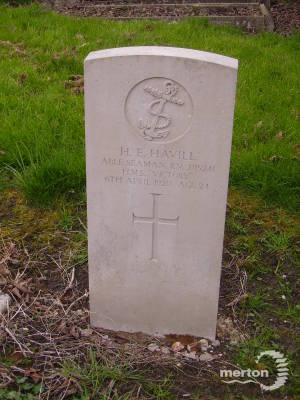 Harold Havill was born in East Budleigh, Devon on 17 January 1896. He was the son of Tom and Annie Havill who were living in Dryden Road, Wimbledon at the time of his death.

Harold became a Brewer's labourer but enlisted into the Royal Navy on his 18th birthday, 17 January 1914.. He served throughout WW1 on many capital ships including HMS King George V, and Achilles.

He died in 1920 of pulmonary tuberculosis, while based at HMS Victory, a shore based establishment later known as Pompey Barracks, Plymouth.