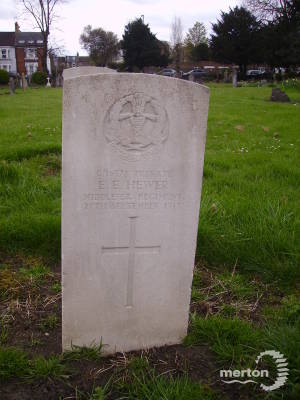 Ernest Hewer appears in the 1911 census at 24 Milton Road, South Wimbledon, living with his widowed mother Lucy aged 56 and sister also Lucy aged 20. At that time Ernest was employed as a milkman.
Ernest was married on 23rd May 1915 to Ellen Sarah Ann Thornback (aged 19) at All Saints Church South Wimbledon. He was employed at that time as a fishmonger. Ellen lived at 79 Haydons Road, and was the daughter of William Samuel Thornback who worked in the leather trade.

Ernest enlisted in Wimbledon shortly after he married.
The 22nd Bn Middlesex Regt was formed in June 1915 as a Bantam Battalion. [In 1914 the Member of Parliament for Birkenhead, Alfred Bigland, pressed the War Office for permission to form a battalion of men who were under regulation size but otherwise fit for service. A few days later, some 3,000 men had volunteered, many of whom had previously been rejected as being under height. The bantams were very popular at home and were often featured in the press. However, by the end of 1916, it was found that the general fitness and condition of men volunteering as bantams was no longer up to the standard required. Brigades were informed that no more undersized men would be accepted, and the Divisions lost their bantam status as replacements diluted the number of small men in the mix.

Ernest died on training at Aldershot four months after enlisting. The register of soldier’s effects shows that £2 2s 6d was passed to his widow Ellen. It appears from marriage records that she married again on 7th April 1917 to John Peters, a locomotive foreman at St Mary’s Paddington.