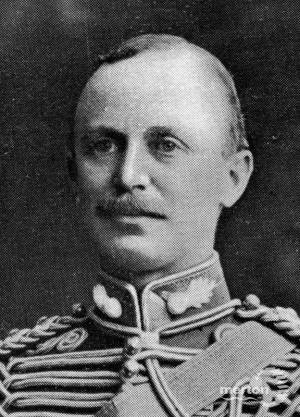 Charles Holland was the son of Mr and Mrs Charles Holland. He was commissioned into the Royal Artillery in 1895, Lt in 1898, Capt 1901 before going to South Africa and taking part in operations in the Orange River Colony. He served in India and Ceylon and was promoted to Major in 1912. He was married in St Mary’s Church Wimbledon in December 1909 to Enid Gwen Pollock Horne, daughter of Mr and Mrs Horne of East Hill House.

They went to live in The Isle of Wight at Sentry Mead, Totland Bay where their son Graham Michael Holland was born. (Census 1911 refers) Graham was aged four when his father was killed. Gwen went to live with her parents-in-law at 7 The Grange, and subsequently re-married to John Howell Loveden Pryse at St Paul’s Parish Church South Kensington on 18th March 1918.

Charles Holland is mentioned in the transcript of the Carved in Stone interview with Mike Norman-Smith whose family home is 7 The Grange.

It is believed that Major Holland was the first Field Artillery Officer to be killed in the 1st World War.
His obituary was reported in the Wimbledon Borough News of 5th September 1914.