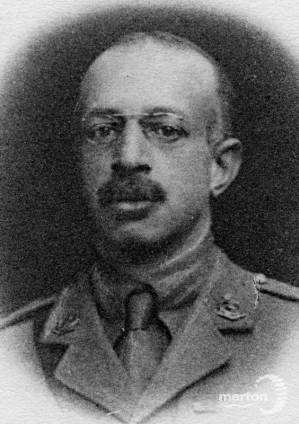 Thomas was the eldest son of Thomas Lewis Ingram of The Priory, Wimbledon Common, London. He was educated at Monkton Combe School, nr. Bath, and at Trinity College, Cambridge, qualifying as a doctor in 1903. He then held house appointments at Westminster and Poplar Hospitals.
He married Lilian Loveday Emily Ingram (eldest daughter of Lt Col Donnithorne, Royal Scots Greys) of Queen's Cottage, Alexandra Court, Wimbledon, London on 29th December 1909 at St Pauls Kensington, and had two children.
Thomas’ brother James married Lilian’s sister Loveday Isobel Donnithorne on 17th April 1910 at the same church. James lived at Rosslyn, The Downs, Wimbledon at the time of his marriage.

Thomas had previously served as a trooper in the Middlesex Yeomanry during the South African War, gaining the Queen’s Medal with three clasps. He was in practice at Welford, Rugby when war broke out, and immediately applied for a commission in the R.A.M.C.

He was granted a temporary commission at the rank of lieutenant on 12th September 1914. He entered the war in France on 30th October, and then was attached to the King’s Shropshire Light Infantry as their medical officer the following month.

Thomas was awarded the Military Cross “For conspicuous devotion to duty and energy at Hooge”, and the Distinguished Service Order for his actions at Morteldje - “For conspicuous gallantry and devotion to duty. He collected and attended to the wounded under very heavy fire and set a splendid example. Since the commencement of the war he has been conspicuous on all occasions for his personal bravery.”

He was killed in action on 16 September 1916 aged 41, during the Battle of The Somme, searching for wounded on the German wire. His Colonel, B L Murray, wrote of his bravery and stated: “He was loved by every man in the regiment.” Brigadier General Nicholson wrote "No more gallant gentleman or braver soldier ever lived and his dauntless courage and unfailing cheeriness under all circumstances was worth many men and the Officers and men of his Regiment simply worshipped him."