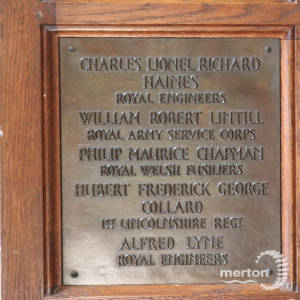 Alfred was born in November 1883 and enlisted in the Royal Engineers on 11 December 1915 aged 32 years and one month. He was a carpenter and joiner, 5ft 8 inches tall with a 35 inch chest and his father John Lyne was shown as next of kin on his enlistment papers.

Alfred married his wife Emily at Kingston Registry Office on 21st March1916 and lived at 43 Griffiths Road, Wimbledon.. They had already had a daughter Kathleen May, born on 4th January 1916. Kathleen's birth had not been registered as her parents had "overrun the time and were afraid of the penalties arising".

Alfred was killed in action on 17 November 1917. The fact that Kathleen was born “out of wedlock” made obtaining a pension for his widow and child difficult, and detailed correspondence about this is contained in the British Army WW1 Service Records 1914-1920.. The pension was finally granted in May 1918.