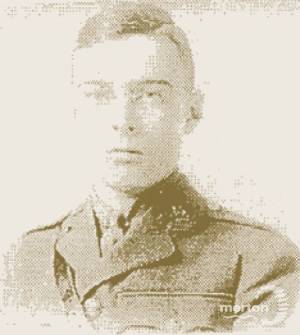 Raymond was the eldest son of Ernest and Mary Wilson. He had a Senior Scholarship to Kings College Wimbledon (KCS) and was a prefect in 1914. He was Editor of the School magazine, Secretary of the Union, and in the 1st XV Rugby. He won the Barry Prize, and obtained a Sambrooke Exhibition, Forest Scholarship and Inglis Scholarship. He went to Worcester College Oxford in 1916, where he was an Exhibitioner in Classics.

Raymond Wilson was commissioned into The Queen's (Royal West Surrey) Regiment and first posted to the 3rd Battalion. He transferred to the 7th Battalion, and was wounded, missing, and later confirmed killed in action on 10th August 1917.

His father received a letter from a Private Woolgar of 7 Queens dated 1st March 1918 in which Woolgar says that although he saw Raymond on 10th August he did not witness what happened to him. His father then received a letter from Sgt G H Bournes with 1 (BR) Corps HQ BAOR dated 1st March 1920 advising him of a German who had information about his son. The detailed confirmation eventually came from this German ex- soldier Emil Loose in a letter dated 14th March 1920 written to Raymond’s father. The Woolgar and Loose letters are kept on file at the National Archives at Kew. Reference WO339/72719.

The war diary of the 7th Bn The Queen’s (Royal West Surrey) Regiment for the 10th August 1917 can be found on the Regimental website http://www.queensroyalsurreys.org.uk . Page 10 of that date notes the disappearance of 2Lt R.E Wilson while leading “No. 3 Strong Point Platoon” of C Company in an attack on “Inverness Copse”.