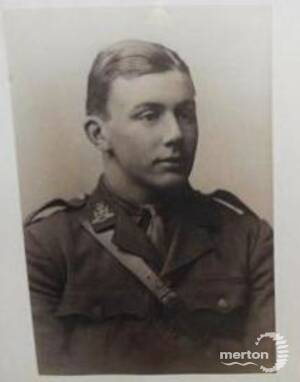 Reginald John Allen Palmer was the only son of the Reverend Edward John and Mrs. Florence Carmette Palmer, of Widmerpool Rectory, Nottingham. He was born at Wimbledon, London.
He was baptised on 4 April 1896 at one month old in Wimbledon.

Lieutenant Palmer was wounded in the Battle of the Somme on 15th July 1916 and died of his wounds in Amiens.

He is remembered on an inscription on a memorial in St.Peter’s Church, Widmerpool, Nottingham, it reads,‘'To the dear memory of Reginald John Allen Palmer, Lieut, 1st Battn the Wiltshire Regiment, only son of the rector of this parish. Wounded near Theipval 7 July 1916 in the Battle of the Somme. Died at Amiens 22 July 1916, aged 20 years. Buried in the military cemetery outside that town. Mentioned in Despatches. Be though faithful unto death, and I will give thee a crown of life.'

He is also remembered in Emmanuel Church, Wimbledon, London. A stained glass window portrays Palmer as a medieval knight carrying a sword and shield. The inscription reads: 'Fortitude. be thou faithful unto death and I will give thee a crown of life. In loving memory of Reginald John Allen Palmer, Lieutenant 1st Wiltshire Regiment. Born at Wimbledon March 9th 1896, died at Amiens of wounds received in the Battle of the Somme, July 22nd 1916.'