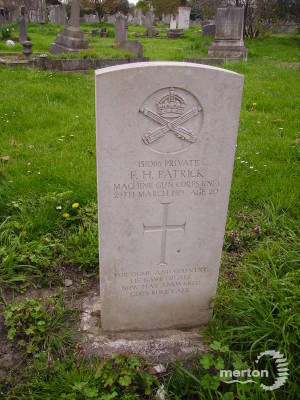 Frederick Harold Patrick was the son of Herbert and Caroline Patrick (nee Marshall).

He was baptised on 7th May 1900 in Tooting Graveney.

In 1901 the family were registered as living in 8 Powderham Villas, Sellincourt Road, Tooting Graveney, Wandsworth. The inhabitants included his mother, his two sisters Ellen and Cecilia and two brothers Herbert and William. His father was fighting in South Africa at the time.

By 1911 the family had moved to 51 Laburnum Road, Wimbledon. Frederick’s father had returned from South Africa and was living with the family along with the addition of two more siblings, Leslie and Caroline. At the time his father was working as a bricklayer at a builders.