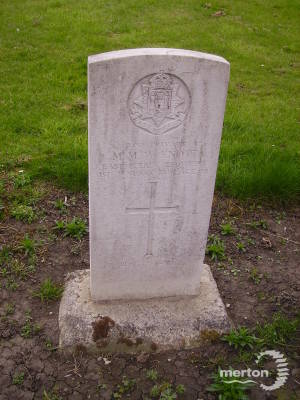 Born in Woking in 1887, Maurice was the son of carpenter Frederick Knott and his wife, Annie. The couple also had three other children – Walter, Ethel and William. In 1901 the family was living at 1 Byfleet Villas, Woking. Walter was employed as an ironmonger’s assistant and Maurice, having recently left school, was working as a grocer’s errand boy.

By 1911 Maurice had left home and was now working as a railway porter and shunter based at Wimbledon Park station. He was lodging in the home of fellow porter, Michael Powell, at 19 Trevor Road, near Dundonald Road, Wimbledon. The following year Maurice married Mary Barker at East Molesey Methodist Chapel. The couple set up home at 64 Mill Street, Kingston upon Thames and their son, Owen, was born on 13 November 1913.

With the outbreak of war, Maurice enlisted in the 2/ 5th Battalion, East Surrey Regiment. This unit was formed in Wimbledon in September 1914 as a home service, second line unit. He came home on Christmas leave in December 1915 and all seemed well. However on his return to service, he developed appendicitis. Tragically he died following an operation at Redhill Military Hospital on January 1, 1916.

Mary Knott and her son were living at 35, Ridley Road, Wimbledon when Maurice died. His funeral cortege departed from the family home and he was buried with full military honours at Gap Road Cemetery, Wimbledon, following a service at Holy Trinity Church. A contemporary entry in the Wimbledon Borough News refers to the delicate health of his young widow but Mary proved to have a strong resolve and survived until 1940.