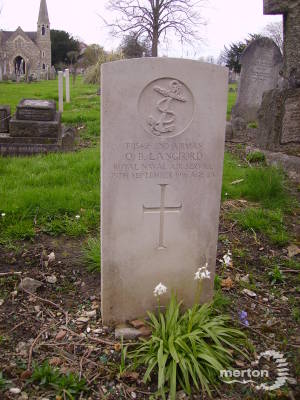 Oscar was born at All Hallows, Barking in 1891. He was the son of Alfred and Florence Langford. The couple also had six other children – Charles, Ethel, Minnie, Edith, Percy and Sidney. At the time of Oscar’s birth, his father appears to have been a pub landlord in the City of London. The family was living at 48 Great Tower Street (near Tower Hill, London), together with Oscar’s grandfather and aunt, who were working as cook and barmaid respectively.

In 1901 the Langfords had moved to 2 Ringmer Avenue, Fulham. Charles snr was a manager at a coffee house and his oldest son, Charles, was employed as a carpenter. By 1911 Oscar’s father had died and his mother had married Alfred Pinney, a car body manufacturer from Somerset. The couple were living at 15, Firth Gardens, Fulham, together with Oscar, his brothers Percy and Sidney, plus Frank’s son (Frank jnr). Oscar was now working as a stationer’s apprentice.

In May 1914, Oscar (now a stationer in his own right), married Mary Harper at All Saints Parish Church, Fulham. The couple moved to 11, Ringmer Avenue, near to his mother. They later moved to 149 Hurlingham Road.

Oscar joined the Royal Naval Air Service in June 1916 (possibly as a conscript). The air arm of the Royal Navy, the RNAS merged with the Royal Flying Corps in 1918 to form the R.A.F. Oscar was attached to HMS President II in Cornwall and achieved the rank of 2nd Airman. After just three months of service, he was badly injured whilst trying to land a coastal class airship in Cury, Cornwall. He died on 15 September 1916, aged 24 and was buried at Gap Road Cemetery in Wimbledon.