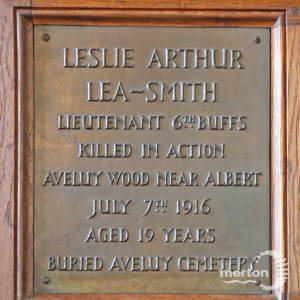 Born in Watford in April 1897, Leslie was the son of coal merchant, Harold Lea-Smith and his wife, Ethel. The couple also had an older daughter, Muriel and two younger offspring, Winifred and Claude. The family moved several times during the early 1900s. In 1901 they were living in Dorking; the 1911 census lists them at Chigwell Row, Essex and by 1915 they had moved to 6, Woodhayes Road, Wimbledon. Also known as Gothic Lodge, this imposing house was the first Wimbledon property to be fitted with electric lighting (courtesy of a previous owner).

Leslie went to St. Andrews, a boarding school in Eastbourne, followed by Malvern College – a public school in Worcestershire. He later went to Oxford University, where he joined the Officer’s Training Corps.

With the outbreak of war, Leslie enlisted in the Public School Brigade, part of the Middlesex Regiment (also known as the Duke of Cambridge’s Own). He later transferred to the 6th Buffs, Royal East Kent Regiment and secured a commission as a Lieutenant. At that time he was described as being 5 feet, 11 inches tall, weighing 9st 3lb, with a dark complexion, brown hair and eyes.

Leslie and his comrades fought in the first stage of the Battle of the Somme (1 July – 18 November 1916). An entry in the regimental war diary describes the first days of the offensive as follows:

"Ordered to continue the attack on Ovillers, 35th and 37th Brigades went in at 3.15am… Unlike the troops of 8th Division who had to cross a wide no man's land in the bright morning sun, the 12th Division attack, at night, adopted sensible tactics of advancing across no man's land while the artillery bombarded the enemy and rushed the last few yards when it lifted…the 9th Essex came under heavy shellfire before it had reached even the British front line; it was difficult to keep direction in the deep shell holes; yet the 5th Berkshire and 7th Suffolk crossed, finding the enemy wire was well cut, and took at least two lines of German trenches before becoming bogged in intense bombing fights in the trenches. 6th Queens were held up by wire and machine gun fire from Mash Valley. Heavy fire from the Leipzig salient - where X Corps would have been attacking - halted supporting units in no man's land, and the attack failed to achieve its objective.

On 7 July 36th Brigade… attacked again and in spite of heavy casualties from German artillery and machine guns in Mash Valley, succeeded in holding the first and second lines that they captured on the spur on which Ovillers stands. By the time the Division was withdrawn to the area of Contay on 9 July, 189 officers and 4576 men had become casualties."

Leslie is thought to have been one of the missing officers. He was killed on 7 July, 1916 and buried at Aveluy Communal Cemetery Extension where his headstone reads “Joyous in Life and in Duty”. He is also commemorated with a monumental inscription at Wimbledon Parish Church.