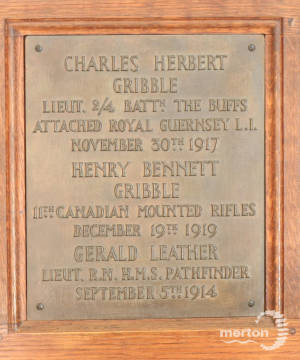 Born in Cleckheaton, Yorkshire on 11 August 1889, Gerald was the son of John and Susan Leather. The couple also had eight older children – Mary, Florence, Beatrice, Bertram, Frederick, Harold and Norman. Gerald’s father was described as a “Gentleman,” meaning that he was an independent man of standing, living off his own income, rather than a wage. ( This is likely to have included land ownership. ) Certainly in 1892, the family home at West Side, Cleckheaton included at least four servants.

By 1901 Gerald was being privately educated at a school in Honiton, Devon. In 1907, aged 18, he joined the Navy and became a sub-lieutenant on 1 January, 1911. In the same year, Captain S. Hutchinson of the Destroyer H. M. S. Ure, described Gerald as “A most promising young officer”. Gerald served on a number of ships prior to the war. In 1914 he was an officer on H. M. S. Pathfinder, a light cruiser built in Birkenhead.

In 1915 Pathfinder was leading the Eighth Destroyer Flotilla off St. Abbs’ head, South East Scotland, when it was attacked by the enemy submarine, U-21. Despite the rough seas, Captain Otto Hersing succeeded in hitting his target. The ship’s magazine exploded and Pathfinder sank in less than four minutes – the first ship to be destroyed by a single motor torpedo.

An eye witness to the sinking was the writer Aldous Huxley, who was staying nearby. He wrote to his father saying: “I dare say Julian told you that we actually saw the Pathfinder explosion – a great white cloud with its foot in sea.” There had been no time to launch the ship’s lifeboats and only 16 of the 278 crew survived ( although records vary on this point. )

“There was not a piece of wood big enough… to float a man—and over acres the sea was covered with fragments—human and otherwise. They brought back a sailor’s cap with half a man’s head inside it. The explosion must have been frightful. It is thought to be a German submarine that did it, or, possibly, a torpedo fired from one of the refitted German trawlers, which cruise all round painted with British port letters and flying the British flag.’

Gerald’s body was never recovered, but his name appears on the Naval Memorial, Chatham. His widowed mother was then living at Belvedere Grove, Wimbledon and he is also commemorated at Wimbledon Parish Church.