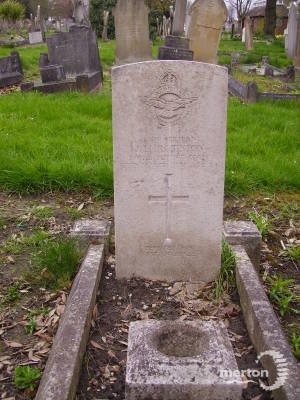 Born on 9 February 1894, John was the son of John and Susannah Robinson. The couple also had three daughters - Ada, Edith and Louisa May. The family lived at Jessamine Cottage, 16, Wandle Bank, near Colliers Wood. John jnr was baptised at All Saints Church, Wimbledon in October 1910.

After leaving school, John jnr became a Gas Worker and later an engineer. He applied to join the army in 1914 but was refused due to palpitations and opted instead to join the Police Force. His second application to the army was accepted and in 1915 and he joined the 2nd Battalion, Life Guards, part of the Household Cavalry. His enlistment papers described him as 6 feet, 1 inch tall, weighing 11 stone, with a fresh complexion and grey eyes.

John transferred to the Royal Flying Corps in August 1916 and was promoted three times, becoming acting corporal in December 1916, Corporal in February 1917 and Sergeant in February 1918. He achieved this final rank in an acting, unpaid capacity.

John was working with a training squadron at Waddington airbase, Lincoln in 1918, seemingly as a pilot. He was killed on 23 March when one of his aircraft’s controls jammed, resulting in a tail slide. He was buried at Gap Road Cemetery, Wimbledon and his gravestone bears the epitaph “Devoted son – Rest in Peace,” as requested by his father.