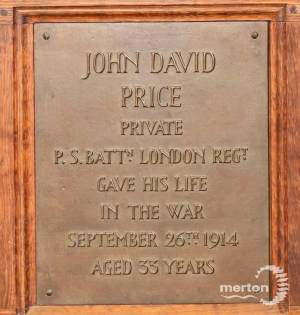 John was born on 25 December 1881 and lived at Southbank, 11 Lansdowne Road, Wimbledon. His father John was a public works contractor.

He was privately educated at Shrewsbury School before going to Trinity College Cambridge where we presume he studied law. He then went to the Inner Temple so presumably became a Barrister. He joined the London Regiment, Public Schools Battalion following the outbreak of war. He was then 32 years of age.

Tragically John died of sudden heart failure on 26 September, 1914, during a training exercise at the Public Schools Special Corps camp at Woodcote Park, Epsom. Although the memorial lists him as being 33, it seems from his date of birth and date of death, he was only 32.

He was buried at Gap Road Cemetery in Wimbledon Cemetery.