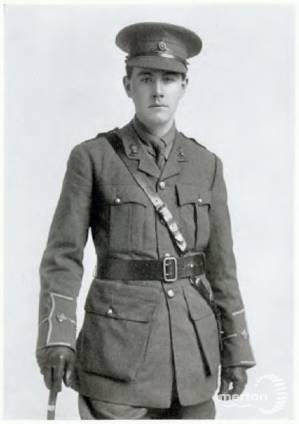 John was the son of Dr. Francis Boxwell John Quinlan and his second wife Ellen. Francis had been previously married to Margaret Elizabeth Carroll, also known as Maude, the daughter of the well-known Catholic Mayor of Dublin, William Carroll. Maude died in 1892 childless. The couple had lived at 29, Lower Fitzwilliam Street which is now the Georgian House Museum.

Francis himself was the son of the owner of the Dublin Evening Post and from a financial point of view did not need to work. However he studied at Trinity for several qualifications, finally obtaining an M.D. He married Ellen in 1894 in Holyhead and they gave birth to John in 1895 in Dublin, at which time Francis was a professor at the Catholic university.
Francis died in 1900, leaving a long and explicit will and a sizeable inheritance. Sometime after 1901, Ellen moved back to London with John.

John was later educated at Wimbledon College. He then attended Stonyhurst Catholic Boarding School in Lancashire.
His fellow students regarded him there as a bright, pleasant little fellow, with a remarkably confident manner for his age. At Stonyhurst he displayed a talent for science and mechanics, so it is perhaps not surprising that when enlisting for military service, his first preference was the Artillery and later the Royal Flying Corps.

Soon after war broke out, he secured a commission as Second Lieutenant in the Royal Garrison Artillery ( Special Reserve. ) He was sent to France in 1915 and fought in various offensives, notably the Battle of Neuve Chapelle ( 10 - 13 March, 1915). During a period of home leave, he visited his former college, where he recounted certain details of army life. As an artillery officer, he particularly deplored the dearth of munitions. At one time it seemed that the English guns were rationed to fewer shells, daily, than could be counted on the fingers of one hand. To John, this was proof that Britain did not really want the war and had made inadequate preparation for it.

In early April 1916 he was transferred to the Royal Artillery and secured a commission as Second Lieutenant in the regular army. Later that month he was attached to the Royal Flying Corps as an observer. In his letters home during the war John made no secret that he thoroughly enjoyed the life in France. A very dutiful son, he made a practice of sending his mother a daily post-card from the Front.

On 3 July 1916, John was flying with pilot, 2nd Lieutenant Stoddart, when their plane was brought down by enemy aircraft. Tragically this attack happened just a day after his twenty-first birthday. At first there was some doubt about John’s fate. A telegram, sent by the War Office to his mother, seemed to offer some hope, stating that although he "was missing on the 3rd of July, 1916…this does not necessarily mean he is killed or wounded." However the following letter, written on that fateful date by John’s Squadron Commander, painted a far gloomier picture : -

No .4 Squadron, 3rd Wing R.F.C .,
Dear Mrs. Quinlan, July 3rd, 1916.
I am quite at a loss how to break the sad news to you about your son, Jack.
He went out at daybreak to-day with Stoddart on artillery patrol, and has not returned. They were seen to be attacked by two hostile machines, and I think Jack must have been killed almost at once, as the machine was seen to nose dive and spin, and fell about two miles inside the enemy's lines. It is so completely crumpled that I should be wrong to hold cut any hope to you that your son can possibly be alive. I cannot tell you how very, very sorry I am for you in your great sorrow. Your son was so keen, and had become such a good observer that his loss is a serious one to my squadron. I cannot help feeling that it must be a great consolation to you to know that he died fighting against odds, and doing his duty gallantly until the last.
All his brother officers ask me to associate them with me in our expression of deep sympathy with you.
With deepest sympathy, Believe me,
Yours sincerely,
THOMAS CARTHEW (Major, Commanding 4 Sqdn. R.F.C.).
P.S.—Your son's kit has been packed up, and will be sent to you through the usual channels. A special search was made at Grandcourt, where the aeroplane fell, to find out whether he was buried there, but no trace of him was found.

Nearly a year after their initial, rather misleading telegram, the War Office wrote again to John’s mother, notifying her that his death had been accepted for official purposes as having occurred on, or since 3 July 1916. His name appears on the Arras Flying Services Memorial. He is also commemorated on the war memorial at Wimbledon College.

John had been due to inherit his father’s legacy on his 25th birthday, but on his death this then went to his mother. On her death it passed to the Royal College of Physicians.

We have a lot more information on the family history in our archives, so please get in touch if you want to know more.