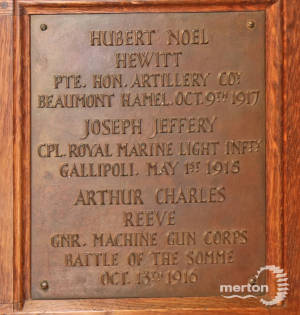 Arthur was born in the middle part of 1897 to parents Arthur and Eliza. He had 2 sisters, Alice born in 1895 and Flora born in 1901. The family lived at 36, Tolverne Road, Raynes Park.
Arthur joined the army straight from school in the 16th company of the Machine Gun Corps. He enlisted at the Hounslow recruitment office.

He died in 1916 during the battle of Transoy Ridge. His body was not identified after the battle, so he is commemorated on the Thiepval War Memorial in Northern France.

A description of the battle and circumstances in which he died taken from war diaries at the time: -

"Heartened by the occupation of much of the Thiepval Ridge, Haig determined to continue large-scale offensive operations into the autumn. The Battle of the Transloy Ridges represented Fourth Army's part in this grand design, and its constituent costly attacks were intended to coincide with simultaneous advances by the Reserve Army planned for early October.

The fighting took place during worsening weather and dreadful battlefield conditions. Fourth Army's objectives necessitated, as a preliminary, the taking of Eaucourt L'Abbaye and an advance on III Corps entire front was launched, after a seven-hour bombardment, at 3.15pm on 1 October. The attack met fierce German resistance and it was not until the afternoon of 3 October that the objectives were secured. Rawlinson’s follow-up attack was delayed by atrocious weather. Starting at 1.45pm on 7 October the advance involved six divisions and resulted in heavy British casualties and little success except for 23rd Division's capture of Le Sars. Continuous rain during the night hampered the removal of casualties and further forward moves. The failure to secure original battle objectives led to a renewed major assault on the afternoon of 12 October when infantry on Fourth Army’s right floundered towards German trench lines in front of Le Transloy, while formations on the left slogged towards the Butte de Warlencourt. Despite the slightest of gains (measured in hard fought for trench yards) the operation was not successful.

Orders for a fresh attack, issued late on 13 October, ignored the desperate conditions and physical state of the attacking troops. The subsequent early morning assault on 18 October (well before daylight) witnessed heroic efforts to advance but minimal gains were made against resolute defenders well supported by accurate artillery fire."