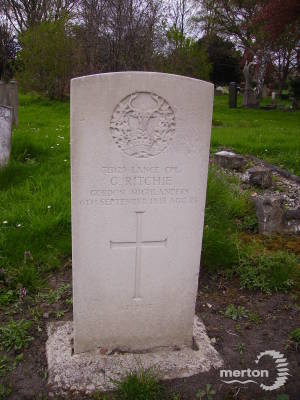 Born in 1894, George was the son of Robert Ritchie from the small Scottish town of Larbert, near Falkirk. He had two older brothers – William and Robert, plus a younger sibling, Alexander. It is unclear whether the family moved to London, or if George settled there alone.

George married his wife Winifred shortly before the First World War. He enlisted in the 14th London Regiment, later transferring to the 7th Battalion Gordon Highlanders where he achieved the rank of Lance Corporal.

Regrettably little is known of George’s military career. He died on 9 September 1918, just two months before the Armistice and is buried at Gap Road Cemetery in Wimbledon. His widow, Winifred, added the epitaph “At Rest” to his gravestone. She later remarried and settled in Love, West Sussex, where she died in 1977 aged 80.