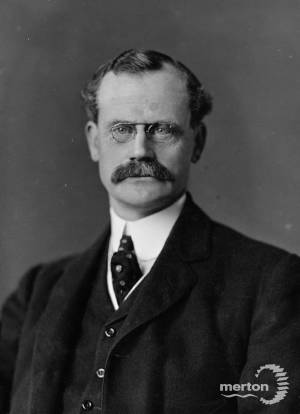 Born in 1863 in Chennai, India, Leslie was the son of Sir William Robinson, governor of Madras and his wife Dame Julia. The couple had eight other children, four of whom died in infancy. Leslie’s surname at birth was Robinson but his original family name was restored in 1898. After leaving India, his family settled first in Brighton, then moved to Paddington. Leslie was educated at Kings College School and then at University College London. He was also educated for a short period in Germany.

Leslie married Frenchwoman Eliza Bauduy c.1891 and between 1893 and 1910 the couple had 5 children. Having studied engineering, he became an assistant to the under-manager at Messrs Denny of Dumbarton. He left the firm in January 1889 to go to sea with the British India Steamship navigation company. That same year he moved to London and began work as a lead draughtsman at Thorneycroft’s of Chiswick, later progressing to become works manager. In 1891 he went to Le Havre, France to supervise the construction of 2 new torpedo boats for the French Navy.

During the early 1890s Leslie commenced private practice as a consulting engineer. He was then living in Westminster and became a member of the institute of Mechanical Engineers in 1893.

By 1901 he had moved to Wimbledon, making his home at Clermiston, 1, Burghley Road. He was now a partner in the firm of Robertson & Outram and played a vital role in the development of railways around the world. He acted as Secretary at the International Railway Congress and also accompanied the Commission on Light Railways appointed by the Cape Government.

Leslie’s tact and organisational skills are said to have ensured the smooth and business-like development of the Engineering Standards Committee, of which he was Secretary. In recognition of his services to industry, Leslie was given the Freedom of London in March 1904 by the worshipful company of Patten makers. He was also the author of a seminal work on water tube boilers which is still available today.

In 1915 Mr. Robertson placed his services at the disposal of the Government to support the Ministry of Munitions. He was appointed assistant to the Director of Production and received the temporary title of Lieutenant Colonel. In 1916, he accompanied General Kitchener who was due to visit Petrograd in order to discuss the war on the Eastern Front with Russian Tsar Nicholas.

On 5 June 1916 Kitchener and his staff boarded H.M.S Hampshire bound for Archangel. As they left Scapa Flow, they sailed into stormy weather and their Destroyer escorts were instructed to return to base. Naval forces were unaware that the area had recently been visited by the German submarine U-75, which had laid 22 mines off the coast of Orkney. Struggling against the wind, the Hampshire could only maintain 13.5 knots and was about one and a half miles off shore. At around 7.45pm the ship hit a mine and sank almost immediately. Kitchener and his staff perished, together with the officers and nearly all of the ship’s 655 crew. Just 12 survivors managed to find their way ashore.

The Hampshire had been down for four hours by the time her lifeboats started to reach the shore. The first raft, which left the sinking ship with 40 men, picked up a further 30 from the water. By the time it reached land only six were left alive. A second craft, carrying 40 men, made it to shore with just 4 survivors. The action of the authorities prompted intense speculation about the sinking. Armed men had been stationed round the cliffs to ward off curious locals and people had been actively discouraged from helping to rescue the stricken craft. Theories circulated that Kitchener had been deliberately killed, or that a body-double was lying dead in his place.

It is likely that in the confusion surrounding the Battle of Jutland, naval staff had not realised that U-75 had penetrated the Orkneys. On the night itself, officials were unsure which boat had sank. The official report stated that Kitchener and his staff were in a tender that capsized moments after leaving the ship.

Leslie drowned, aged 52. His body was never recovered but he is commemorated on the Hollybrook memorial in Southampton and also has a monumental plaque at Wimbledon Parish Church.