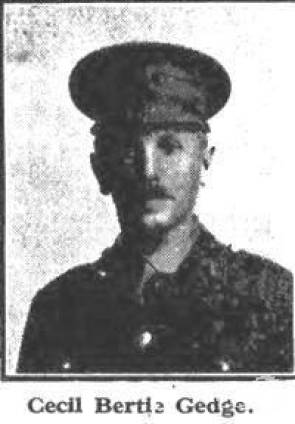 Cecil was born on 20 February 1866 at Mitcham Hall, London Road, (near Mitcham Station) where he lived with his father, Sydney Gedge, an MA, Conservative MP and Solicitor, his mother, Augusta Elizabeth Gedge, his brother, Sidney Jnr and sister, Beatrice. His Aunt Clara lived with the family, and as they would have been well off, the household included three servants. He was baptised at St Peter and St Paul Church in Mitcham. Cecil spent his early years in Mitcham, but by the time of the 1871 census the family were living at 48 Marina, St. Leonards, Hastings which was a substantial property on the promenade. The family had now grown to include two more brothers, Walter and Leslie, but unfortunately, Sidney Jnr died the following year aged just 14. The 1881 census records Cecil as a boarder at Eton College, while the family were living back at Mitcham Hall. His brothers Walter and Leslie were boarders at Eagle House School, Wimbledon. Cecil went on to Trinity College, Cambridge, where he graduated with a BA. He was a student at Inner Temple and was called to the Bar there in 1891 and became a solicitor and barrister and practised on the South-Eastern Circuit and at the Essex and Herts Sessions.

On the 6 October 1892 Cecil married Jessie Catherine Bickley Rogers at St. Margaret’s, Westminster. They had a daughter Sydney Jessie born on 12 September 1893. In 1901 the family were living at 5H Hyde Park Mansions, Marylebone and had three servants. By 1911 the family had moved to 28 Brackondale, Strawberry Hill Road, Twickenham. Cecil was a good sportsman, being well known in Switzerland as a curler and he was also a keen scholar, and had edited various publications, including “Granta” in 1890, “Huts” 1902-3, and was sub-editor of Lord Halsbury’s “Laws of Ayland”.

Cecil joined the 23rd Service Battalion, Royal Fusiliers known as the Sportsman’s Battalion, on 9 October 1914 at the age of 48, which was over the military age. This battalion consisted almost entirely of men from the world of sport or entertainment. The battalion was privately raised and usually took men up to the age of 45. The battalion included a champion boxer, cricketers, and footballers. They were men who did not need to serve in the First World War but had an unquestioning sense of duty.

There was an application to give him a commission with the Welsh Army Corps, but this was rejected as only Welshmen could be appointed. He was later gazetted 2nd Lieutenant in the Royal Fusiliers, 3rd London Regiment on 1 April 1915. His battalion went to France in June 1915, and was attached to the Grenadier Company, Garhwal Brigade, (an Indian Army Corps). Cecil was killed in action at the Battle of Loos on 25 September 1915 after having volunteered to lead a bombing party. The cost of the ‘Pietre’ action was 107 officers, 1172 British other ranks and 1788 Indian other ranks.

His Colonel wrote - “ He was wounded early in the advance and came back and had his wounds dressed, and then went out again to lead his men, and has not been seen since. He was a brave English gentleman, and we are glad to think he was one of us…. I am very sorry to say that I have had strict orders not to send forward for ‘Mention’ any officer who has been killed. If it were not for this very strict rule I should have sent forward your husband’s name.”
A brother officer wrote - “There is one thing that may console you, and that is, your husband showed the greatest courage. He was wounded by shrapnel early in the morning, but refused to go back. He just had his men bind him up, and when the order came to go over the parapet, he led his men over like a hero.”

Just before his death he passed first out of 50 officers in the examination for a captain’s commission. Cecil has no known grave and is commemorated on the Loos Memorial, Pas de Calais, France and on the Mitcham War Memorial. He also appears in De Ruvigny’s Roll of Honour.

Cecil was the last surviving child of Sydney and Augusta, as his siblings had all died previously. Sydney Snr died aged 93 in 1923, at Mitcham Hall, (now demolished), while Augusta died in 1912 aged 83, after a spell in a ‘Home for Nervous Ladies’ in Wansted. Cecil’s widow, Jessie died on 27 Aug 1923. His daughter Sydney Jessie married William Greville Macdonald Nicholl in Lahore, India in 1921, and died in New Zealand on 17 Oct 1988.