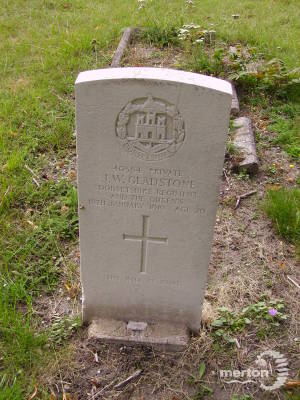 John was born in Tooting on 10 August 1898 and baptised on 4 September 1898. He lived with his father, Harry Herbert, a general labourer, and mother Alice, at 3 or 3a Glenluss Villas, Sellincourt Road, Tooting along with his brother Harry aged 2. On the 1901 census the family were still in Glenluss Villas but father Harry was marked as ‘absent’ and John now had a baby sister, Alice aged 1. By 1911 the family had moved to 92 Maybury Street, Tooting, and father Harry was back. Further additions to the family were Joseph, Ethel, Annie and Charles. John was still at school but was also working part-time as a news boy for a newsagent.

John enlisted in Merton on 1 September 1914 aged 16, into the 8th Battalion, The Queen’s (Royal West Surrey Regiment) later transferring to the 3rd Battalion Dorset Regiment. His personal details were recorded as – “Height 5 feet 5inches. Weight 116lbs. Chest 34inches, expansion 2inches. Complexion fair. Eyes blue. Hair fair”. His occupation was recorded as a Barman. John must have lied about his age when enlisting as the minimum age was 18 years.

John tragically died on 18 January 1919 by committing suicide at Morden just prior to his demob. The following is the report from The Surrey Comet of 25th January 1919 Page 3:-

“The Coroner (Dr. M.H.Taylor) investigated a sad tragedy at St. George’s Hall on Thursday afternoon, when an inquest was held respecting the death of William John Gladstone, a young soldier 20 years of age who had served 41/2 years in the army, having been twice wounded, and who ended his life on Saturday by throwing himself in front of a train near Morden Station.
Harry Gladstone, of 131 High-street, Collier’s Wood, the father of the dead soldier, said his son was wounded in France in 1915. After his recovery he served in a Labour Battalion for two years, and was then transferred to the Dorset Regt., and again sent to France. He was wounded a second time, and was in hospital three months. He had recently come home on 28 days’ demobilisation leave, and ever since his return home he had been depressed. Witness was unable to account for this depression, but he thought it might possibly have been caused by his suffering from his first wound. He was slightly gassed at the time he received that wound. He did not appear to suffer from nervousness, and his depression did not cause witness any anxiety. He was not in any trouble, so far as witness knew. Previous to his discharge from hospital on the last occasion he was always bright and cheerful. During Friday night witness heard his son shouting, and next morning asked him what was wrong. The lad replied that he had had a nightmare, and had been unable to sleep.
Thomas Harrison, station-master at Morden, said on Saturday morning he was riding on the front of the 11.5 train from Croydon to Wimbledon. As the train was nearing Morden Station he saw a soldier sauntering across a patch of grass near the railway. The driver whistled, but to their surprise the man kept straight on, and just as the train was getting close to him he seemed to take a running leap and threw himself under the leading coach. The train was travelling at about eight miles an hour, and was pulled up in 43 feet. It was utterly impossible for the driver to miss the man.
The driver of the train, William James Roberts of West Croydon, said, on seeing the soldier about 20 feet away, he blew the whistle, and applied the brakes, but the man was too near for the train to be pulled up in time. Deceased stepped over the near-side rail, and laid his head on the off-side rail.
Dr. Bentley said the man’s neck was broken, and death was due to fracture of the vital vertebrae and the spinal cord. The Coroner said, from the evidence, there could be no doubt that the deceased took his life, and that he must have been out of his mind at the time.
The father said if he was it must have been very sudden.
The Coroner returned a verdict of “Suicide whilst temporarily insane.”

There was also a report in The Mitcham Advertiser (Sutton) of 24th January 1919 Page 4.

John was entitled to the British War Medal and the Victory Medal.