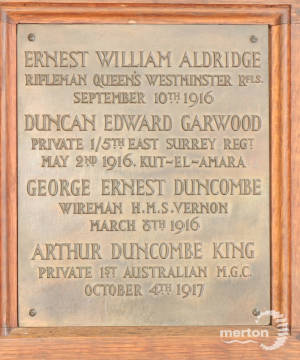 Born in Bermondsey, London on 22 January 1894, Ernest was the middle child of Edward and Elizabeth Aldridge. The couple also had three older children, Lilian, Edward and Susan, plus three younger offspring, Henry, Leonard and Vincent.

In 1901 the family were living at 3 Macks Road, Bermondsey and Edward Aldridge was working as a labourer in a jam and tea manufacturers. His eldest daughter, 16 year old Lilian, had also found work as a hand machinist at a clothes factory. On 20 April 1903, Ernest enrolled at Rolls Road School, Southwark.

By 1911 the family had moved to 161 Queens Road, Wimbledon, possibly in order to find work. Most of Ernest’s siblings were now in employment. His brother Edward was an Assistant superintendent at a Life Assurance company; sister Lilian was a blouse machinist and young Henry was an errand boy for a surgical instrument maker. Ernest himself was a porter for a wigmaker.

When war was declared, Ernest was living at 32 Graham Road, Wimbledon and working as an insurance clerk. In 1915 he enlisted on a Short Service Attestation in the Labour Corps, later transferring to the 16th County of London Battalion, London Regiment, also known as the Queens Westminster Rifles.

The battalion was posted to the Ypres Salient in May 1915, where they occupied various positions along the Ypres-Roulers railway. The men were then posted to the Somme and fought at the infamous battle which lasted from July to November 1916. Ernest’s battalion was involved in the disastrous assault on Gommecourt (1 July) during which 600 of his 750 comrades were injured or killed.

Ernest was killed in action on 10 September 1916 and buried at the Thiepval Memorial Cemetery, near Picardie. He is also commemorated with a monumental inscription at Wimbledon Parish Church.