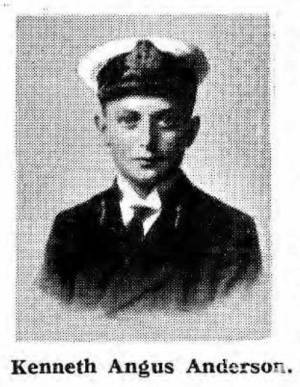 Born in Kings Langley, Hertfordshire on 13 November 1898, Kenneth Angus Anderson was the second son of ship owner Kenneth Skelton Anderson and his wife, Louisa. Although born in Hampstead, Kenneth snr is likely to have had Scottish ancestry, given the naming of his children. In addition to Kenneth jnr, he and his wife also had an older son, James and a younger son, Hew. A year prior to young Kenneth’s birth, his father joined major shipping company, Anderson, Anderson and Co. (Possibly a family firm.)

In 1901 the Andersons were living at Tumsell Woods, Hempstead Road, Watford. Kenneth snr was clearly a man of means as his household included at least four servants. He appears to have had some sort of diplomatic role during his career, for in 1909 he was given the Order of St. Michael and St. George, an honour usually bestowed on men who held high office in other territories of the British Empire.

By 1911 the family had moved to Stamford House, 23 West Side, Wimbledon Common. The boys are not shown in the local census and are likely to have been away at boarding school. Kenneth jnr is known to have been educated at the prep school, St. Aubyns, in Rottingdean, Sussex until September 1913. He then entered the Royal Naval College in Dartmouth.

Following the outbreak of war in September 1914, Kenneth joined the crew of the battleship H.M.S. Bulwark as a midshipman. Just two months later tragedy struck. At 07:50 on 26 November 1914, an explosion ripped Bulwark apart whilst she was moored at Number 17 buoy in Kethole Reach, west of Sheerness on the River Medway. It is thought that cordite charges stored near a boiler room bulkhead overheated, causing the blast. 736 members of the 750 crew were killed, including Kenneth who was just 16 years old. The 14 survivors were terribly injured and two later died in hospital.

Kenneth is commemorated on the Portsmouth Naval Memorial in Southsea. His name also appears on a monumental inscription at Wimbledon Parish Church. It is alongside that of his older brother James, who died aged 19 on 10 October 1916, from injuries sustained at the Battle of the Somme.

Despite the loss of their precious sons, the Anderson family continued to support the war effort. As a leading maritime figure, Kenneth snr was a member of the Shipping Control Committee between 1915 and 1921 – helping to protect British interests by controlling the passage of ships between foreign ports. He was knighted in 1919 for his service to the Crown and became Baronet, Sir Kenneth Skelton Anderson of the Yair, Galashiels.