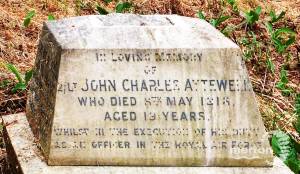 Born in the London district of Chelsea on 30 October 1898, John was one of twin sons born to John and Matilda Attewell. In addition to his brother, Arthur, he also had an older sister, Lilian. The Attewell family initially lived at 65 Oxford Avenue, Merton but later moved to 2 Richmond Avenue, Merton. John jnr was educated at Rutlish School in Merton Park. He started work as a Civil Service clerk at Somerset House, London, in October 1914.

John was just 16 when he volunteered for military service. His father wrote to the Commanding Officer of the 3/16 County of London Regiment, expressing concern that his son was too young to be sent to France and how he had hoped the boy would complete his training and apply for a commission at the appropriate age.

In November 1917 John obtained a temporary commission in the Royal Flying Corps. He was stationed in Denham, Buckinghamshire. He died on 5 May 1918 in Thetford, Norfolk and was buried at St. Mary’s, Merton on 14 May 1918.