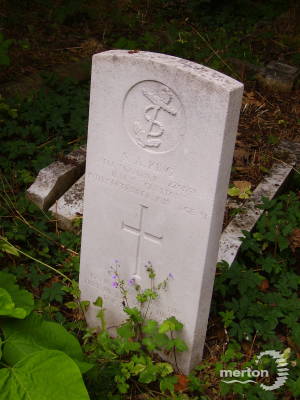 Samuel Arthur King (Arthur) was born on 31 December 1886 in Mitcham, Surrey and baptised at St Mary’s Merton on 6 March 1887. His father, William, worked on the railways as a labourer. His mother was Ellen and Arthur was the 4th of eight children. He had an older sister Elizabeth and two older brothers William and George. Four younger sisters followed - Alice, Ellen, Lilian and Dorothy. His family lived in Trafalgar Terrace, Abbey Road, Merton.

He first went to sea on 25 February 1904 and served on HMS Northampton for several years. Then, after a number of postings, he was assigned to HMS Glatton on 31 August 1918. HMS Glatton was purchased from the Norwegian Navy at the outbreak of the Great War and refitted for the Royal Navy.

The refit took until September 1918 and, on 11th September 1918 H.M.S Glatton sailed for Dover. At 18.15pm on 16th September there was a low-order explosion in the mid-ship magazine which ignited the cordite stored there. The captain, Commander N W Diggle, ordered the magazines to be flooded but the crew were unable to flood the rear magazines. An ammunition ship, H.M.S. Gransha, was only 150 yards away and there was a risk of a massive explosion which could devastate Dover if the fire from Glatton ignited Gransha’s ammunition. Vice-Admiral Keyes therefore ordered H.M.S. Cossack to torpedo Glatton. At 20.15 Glatton capsized and the fire was doused. Casualties were heavy. 60 men were killed outright and 124 were injured. Of these 19 later died of their burns. Able Seaman Samuel Arthur King was one of them.

He is commemorated in St Mary’s Church.