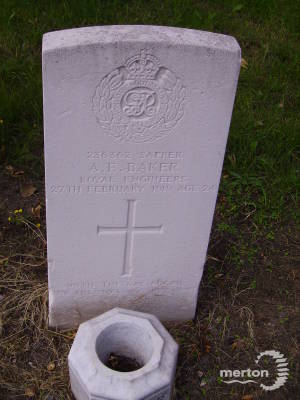 Born in Mitcham c1895, Albert was the son of William Charles Baker and Hannah Baker. His father was a varnish maker. In 1901, aged 5, he was living with his parents at 1, Homewood Road, Mitcham. By 1911 the family had moved to 24 Broomfield Road, Tolworth, Surrey and Albert was working as an Ironmonger's Assistant.

It is not known when he signed up but Private Baker served with the following regiments during the First World War:

Private Baker was serving in the 353 Electrical and Mechanical Coy., Royal Engineers at the end of the war. The Electrical and Mechanical Companies were responsible for machinery, including underground boring. He was wounded and returned to the UK where he sadly died of his wounds at the Holborn Military Hospital, Mitcham on 27th February 1919. He is buried in the Mitcham (Church Road) Burial Ground.