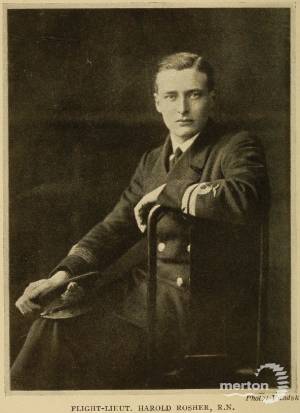 Born in Beckenham, Kent on 18 November 1893, Harold was the eldest son of Frank and Gertrude Rosher. The couple also had three other children, Helen, Mary and Ernest. Frank Rosher was the manager at a Brick and Cement firm. Clearly a man of means, he was not only an employer in his own right but the family home at 57 Merton Hall Road, Wimbledon, included a number of household servants.

Harold was educated at The Dene, Caterham and Woodbridge School. A good student despite suffering from asthma and bronchitis, he was considered below the average height for his age. An open air life was considered beneficial for his health, so he became a student at the South Eastern Agricultural College in Wye, Kent, until the outbreak of war.

In 1914 Harold applied for a commission in the Royal Naval Air Service. In order to get a head start, he enrolled at Brooklands Aerodrome, Weybridge and commenced training to be a pilot. He was appointed as a Probationary Flight Sub-Lieutenant on 18 August and transferred to the Grahame-White Training School, Hendon, where he obtained his Aviators’ Certificate on 30 September 1914. He was later promoted to Flight Lieutenant.

Founded in July 1914, the Royal Naval Air Service (RNAS) was the air arm of the Royal Navy. It ultimately merged with the Royal Flying Corps - the air arm of the British Army, to form the Royal Air Force in April 1918. In the early days, aircraft were mostly used for Fleet Reconnaissance and patrolling the coast for enemy ships and submarines. Harold took part in various raids over Belgian towns including Zeebrugge and Antwerp. An account of his exploits appeared in the Wimbledon Herald in 1915.

Harold belonged to No. 1 Squadron (No.1 Wing), with bases at Hendon, Dover and supporting the British Expeditionary Force in Dunkirk. He also flew from the Royal Naval Air Station at Gosforth, Newcastle. During his time with the Squadron, he sent numerous letters to his family, vividly describing his life as a pilot, both on and off duty. These letters were published posthumously in a book: 'With the Flying Squadron: Letters of a Pilot of the Royal Naval Air Service During the First World War.' In one letter to his mother on the 16 March 1915, he wrote:

“….Dearest Mum,
Whatever induced you to do it. The tobacco etc. arrived but the toffee had all melted, and a more sticky mess you can't conceive. It was as much as I could do to read your letter. I managed to rescue some of the toffee and the general opinion on same is that it is very good. Two letters from Dad and the sleeping bag arrived by same mail, for which many thanks….”

In a letter to his father on 12 February 1915, Harold described a bombing raid over Zeebrugge, Belgium:

“… The weather was misty and cloudy, and very cold. Off Nieuport I was five miles out to sea and 4,000 feet up. Before I came abreast of it I saw flashes along the coast. A few seconds later, bang! bang! and the schrapnel burst a good deal short of me, but direction and height perfect… All along the coast the guns were firing, nasty vicious flashes, and then a puff of smoke as the shrapnel burst. I steered a zigzag course and made steadily out to sea, climbing hard.
…Ostend was simply a mass of guns. After flying for three-quarters of an hour, I reached Zeebrugge. I had to come down to 5,500 feet because of the clouds. I streaked in through them, loosed my bombs and then made off. I was hopelessly lost and my performance of the day before was repeated in the clouds… I got back after one and a half hours in the air. As to what happened generally I can’t tell. It may possibly appear in the papers….”

Such courage under fire was recognised on 22nd March 1915, when Harold was “Mentioned in Despatches for Meritorious Work in connection with Air Attack on Ostend – Zeebrugge and Bruges on February 11th, 12th and 16th.” He survived several crashes, including one where he ended up in the Docks at Dunkirk whilst flying a Vickers bi-plane. He also crashed a Morane aircraft at Dunkirk – it overturned and was completely smashed up, but he emerged uninjured.

Harold was killed on 27th February, 1916 at Dover, whilst testing an aircraft newly repaired after an earlier accident. The machine was intended for use by trainee pilots, but Harold insisted on testing it first. Having started his descent about a mile from the aerodrome, the machine suddenly nose-dived and crashed to the ground. Harold died instantly - he was just 22 years of age. The cause of the crash was never explained. Harold was buried with full naval honours on 2nd March, 1916 at Charlton Cemetery, Dover. He is also commemorated locally at
St. Andrews Church, Herbert Road, Wimbledon.

Harold's two sisters, Helen and Mary also served their country during the war by volunteering with the VAD's. Harold's book is still in publication. The entire book can be read online by searching his name via the following link:- https://www.hathitrust.org