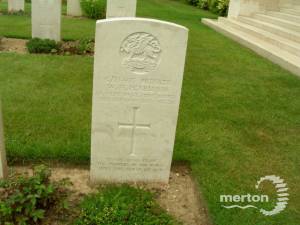 Born in Hackney on 22 December, 1878, William was the son of carpenter /builder, William Pearmain and his wife, Eliza. The couple had an older son, Walter and a younger son, Harry, born c.1881. They were then living at 66 Lauriston Road, Hackney and William Jnr later attended Sidney Road School. During the following decade the Pearmains had another son, Sydney and moved to 44 Christie Road, Hackney. By 1901, 22 year old William was employed as a Warehouseman.

On 5 September 1908, William Jnr married Beatrice Green at St. Paul’s Church, Homerton, Middlesex. The following year the couple had a daughter, Dorothy, who was born in Haringey. By 1911 William was employed as a Commercial Traveller in Millinery and was living at 8 Hartley Street, Levenshulme, Manchester, together with his young family. Two more children followed - Ruth, born in Manchester in 1913 and Margaret, whose birth was registered in Croydon in June 1917.

By 1915 the family was living at 25 Frinton Road, Tooting. William enlisted in the army on 9 December 1915, but was not called up until 31 July 1916 due to his age (37 years) and his role as the father of three young dependent children. He became a Private in the 4th Battalion, East Kent Regiment and was described at the time as being 5 feet, 5.5 inches tall, weighing 122 lbs, with a chest measurement of 34 inches and three moles on the side of his neck.

William remained on Home duty with his regiment and was then transferred to the 6th Battalion, known as ‘The Buffs’. Formed as part of General Kitchener’s First New Army, the battalion left for France with the British Expeditionary Force on 31 December 1916. Here the unit joined the 37th Brigade, 12th (Eastern Division). William died less than a month later on 21 January 1917, aged 38. He is buried at Faubourg-d'Amiens Cemetery, Nord-Pas-de-Calais, France and his name also appears on the Mitcham War Memorial.

Following William’s death, his personal effects were returned to his widow, including: - 3 discs, some letters, photos, Religious books, a bunch of keys, a mirror, a knife, a card case, a pair of scissors, a tobacco pouch and cards. According to Probate Records, William also left Beatrice the substantial sum of £238 and 3 shillings (roughly £5,015 in modern money.) In addition she received an army pension of 26 shilling and 3 pence per week (just under £28 today ).

After the war Beatrice moved back to her parental home at 106 Roding Road, Hackney and lived there with her daughters until the 1930’s. By 1935 she appears to have emigrated to the USA and married William Payton in Tennessee on 2 December that year.