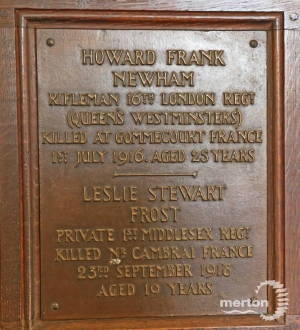 Born in Eltham, Kent, in 1891, Howard Frank Newham was baptised in Wimbledon on 11 June that year. He was the son of Frank Newham, a draper from Hastings and his wife Edith. The couple also had a younger daughter, Kathleen, who was born in Folkestone, however during the mid-1890s the family moved to 62, High Street, Wimbledon. Tragically Howard’s father died in 1895 and by 1901 his widow and young daughter were living at 8 Alexandra Road – Edith appears to have taken in boarders to supplement the family income. Howard, now aged 9, was a resident scholar at the Warehousemen, Clerks and Drapers School in Purley. This was an independent boarding school, founded in 1853, to provide an education for the orphaned children of tradesmen.

Howard’s mother died in Kingston in 1909. By 1911 his sister was working as a draper’s assistant at the Frost family store in Wimbledon Village and 19 year old Howard was a junior clerk, living in lodgings at 5 High Street, Wimbledon.

Following the outbreak of war, Howard enlisted in the 1/16th Battalion, County of London Regiment, also known as the Queen’s Westminster Rifles. This territorial force was originally part of the British Army Reserve but was greatly expanded during the First World War. Rifleman Howard and his unit were posted to France in February 1915 and served on the Western Front.

On 1 July 1916, the 1/16th Battalion fought in the bloody first day of the Battle of the Somme, suffering heavy losses. Rifleman Newham was part of an offensive launched by thirteen divisions of Commonwealth forces on a line from Gommecourt to Maricourt. Despite a bombardment lasting seven days the Germans put up an unexpectedly fierce resistance and allied losses were catastrophic. The initial attack was a failure although the village of Thiepval, which had been the original objective, was finally captured at the end of September. Aged just 25, Howard was reported missing in action. His body was never found and he was presumed dead. Records show that he left the sum of £380, 7 shillings and 4 pence to his young sister, Kathleen.

Howard is commemorated on the Thiepval Monument in France, which lists the names of 72,194 British and South African servicemen declared missing on the Battlefields of the Somme. His name also appears in the Warrior Chapel at Wimbledon Parish Church.