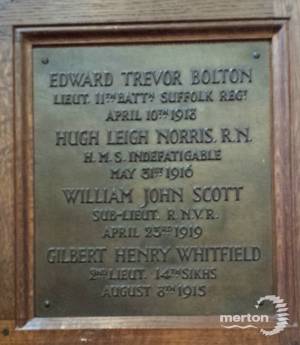 Born in Charmouth, Dorset in 1875, Hugh was the third son of G.P. Dr. Henry Norris and his wife, Emilia. He also had an older sister, Helen and two older brothers, Francis and Hensleigh. Sadly, Emilia Norris died before Hugh reached his first birthday. His father, who married four times, died in 1888. By 1891, Hugh and his sister were living with their stepmother, Julia, at 8 Oak Villas in Gipsy Road, Lambeth.

Hugh attended Dulwich College and later studied medicine at St. Thomas’s Hospital. He qualified in 1898 and joined the Navy as a surgeon on 8 November that year, remaining in the service until his death.

In 1903 Hugh married Nina Dyson and by 1911 the couple were living at 19 Cavendish Road, Southsea, with their 5 year old daughter, Helen. Hugh was now a Staff Surgeon. The few surviving records suggest that he was promoted to Fleet Surgeon at some point prior to 1914 and by 1916 he was serving on HMS Indefatigable.

The Battle of Jutland was the largest naval battle of the First World War. On 31 May 1916, the German High Seas Fleet sought to weaken the Royal Navy by launching an ambush on the British Grand Fleet in the North Sea. However, the British were warned by their codebreakers and put the vessels to sea early. The ensuing battle was confused and bloody, involving 250 ships and nearly 100,000 men. HMS Indefatigable blew up when German shells hit her ammunition magazine. Hugh Norris was amongst the casualties – in fact just 2 members of the 1,019 crew survived.

In total, 14 British ships and nearly 6,000 naval personnel died, compared to German losses of 11 ships and 2,000 men. Having failed to achieve a decisive victory, the Kaiser’s fleet was unable to mount another serious challenge to British control of the North Sea.

Hugh Norris is commemorated on the Naval memorial at Plymouth. His name also appears on a memorial plaque in St. Andrew’s church, Charmouth and a monumental inscription in the Warrior Chapel at Wimbledon Parish Church. There is no record of Hugh having resided in Wimbledon. However, it is probable that his mother was brought up here. His maternal grandfather, Captain Marryat, reportedly bought a family home called Gothic Lodge in Woodhayes Road. A famous author, he wrote ‘The Children of the New Forest,’ plus several novels drawing on his experiences at sea during the Napoleonic Wars.

Following the death of Fleet Surgeon Norris, a tribute in the St. Thomas’s Hospital Gazette, September 1916 noted that “his activities were not confined to his professional work, for he was good at games and his sketches showed no small ability. He inherited from his grandfather, Captain Marryat… considerable skill with the pen, and he was a contributor to many journals, including Punch, besides writing two books, ‘Rice Papers’* and ‘China Side’.

Probate records show that at the time of Hugh’s death, his estate was valued at £257.11s.10d. This was bequeathed to his wife Nina, who was then living at Fernleigh, Avondale Road, Waterlooville, Hampshire.

* Rice Papers was a collection of short stories published in 1905 and written whilst Hugh was serving in China.