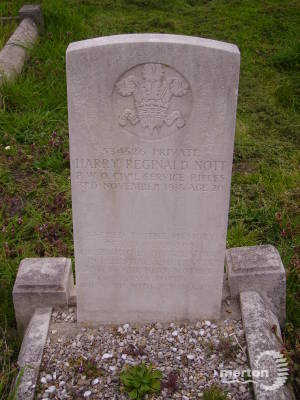 Born in Stockwell, London c.1898, Harry was the eldest son of Henry and Florence Nott. The couple also had two younger sons, Leonard and Archibald, plus a younger daughter, Marjorie. By 1911 Harry’s father was working as a fringe net dealer or haberdasher and the family had moved to 71, Pelham Road, Wimbledon.

During the First World War, Harry enlisted as a Private in the 15th Battalion, London Regiment (Prince of Wales Own Civil Service Rifles). He died of pneumonia at the Grove Military Hospital, Tooting on 3 November 1918, aged 20. The Grove was one of many institutions requisitioned by the War Office for military purposes. It operated as a 550-bed military hospital between 11 November 1916 and September 1919, treating a total of 2,499 officers and 13,459 other ranks.