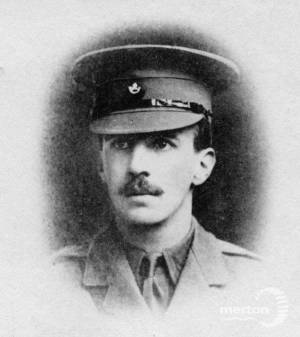 Humphrey was born in Wimbledon c.1890 and baptised on 13th March at Wimbledon Parish Church. The son of Beatrice and Walter Dowson, he had two elder brothers, Basil and Leonard, although Basil appears to have died during childhood. The Dowson family were fairly wealthy – Humphrey’s father was a solicitor, a member of the Orpheus Society - a musical club, and president of the Wimbledon Conservative Club in 1915.

The Dowson family was living at 9 Arthur Road in 1891, together with 5 servants. By 1911 they had moved to Alan Cottage in Belvedere Avenue, Wimbledon. Humphrey was still living with his parents during his early 20s and the census lists him as a student, so he is likely to have attended university. He enlisted in the army in 1915 and disappeared on the 15th September 1916 whilst leading his men along a German trench, shortly after receiving a wound to his hand. He was declared missing, presumed dead and is known to have left £294 to his father in his will.

Due to the uncertainty surrounding Humphrey’s death, his father, Walter, engaged in correspondence with the War Office and Humphrey's fellow soldiers, trying to determine if his son was really dead, how he had been killed and where he was buried. Mr. Dowson eventually declared himself satisfied, having learnt that a similarly “clean-shaven, tall, and well-built” captain was found in a spot near where Humphrey had reportedly disappeared. His son could still not be positively identified as he was not carrying any personal possessions at the time.

Humphrey is commemorated on a headstone in the Delville Wood Cemetery in France, as well as on a monumental plaque at Wimbledon Parish Church.