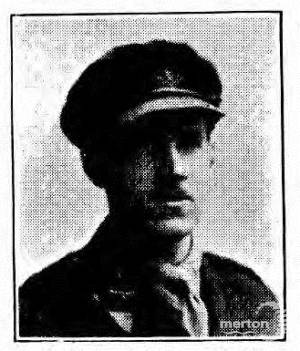 Robert Alister Field was born on 13 March, 1895 and baptised at St. Mary’s parish church, Wimbledon. He was the son of Joseph and Frances Field (nee Ross). The couple had married when Joseph was 41 years old. In addition to Robert, they also had two daughters, Frances and Ruth, plus a younger son, Douglas. Joseph Field worked as a hat manufacturer but retired whilst Robert was still a child. The family initially lived at 91 Worple Road, Wimbledon but moved to 18 Lansdowne Road at some point between 1911 and 1917.

Robert was educated at Rokeby, a private school in Wimbledon, later transferring to Dulwich College. In 1914 he emigrated to Canada to take up farming in Manitoba, but had only been living there for a few months when war broke out. He returned to England and joined the Inns of Court Officer Training Corps in November 1914, prior to becoming a 2nd Lieutenant with the Yorkshire Regiment in March 1915. Clearly a skillful soldier, he was soon promoted to Lieutenant, then Bombing Officer, and achieved the rank of Captain in March 1917.

Robert served with the British Expeditionary Force in France and Flanders from August 1915 and was often commended for his fearlessness and gallantry. He was twice mentioned in Despatches by Sir Douglas Haig, Commander of the British Army and received the Military Cross in January 1917 for bravery on the Somme, when he left the trenches under heavy fire.

Sadly, Robert was killed in action at Henin on April 2, 1917, aged just 22. He is buried at the Henin Communal Cemetery in France and his name appears on the memorial at Wimbledon Parish Church.