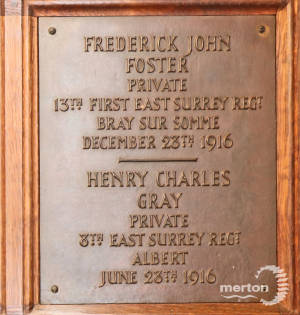 Frederick was born in 1894, the only child of John and Lucy Foster. He was baptised in Holy Trinity Church, Wimbledon on 29 August, 1894. John Foster seems to have died when his son was a small child. Certainly by 1901, seven year old Frederick was living in Wimbledon with his uncle, aunt and cousin. Lucy Foster later ran a boarding house at 34 Gore Road, Raynes Park, by which time Frederick was living with her again.

Frederick worked as an assistant steward on merchant ships from the age of 17, before joining the army.

He was killed in France.