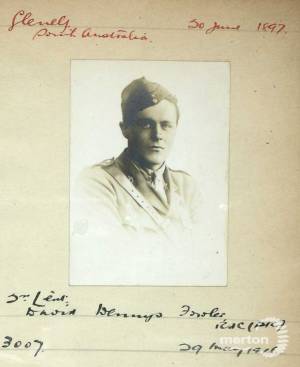 Born on 20 June 1897 in Adelaide, Australia, David was the son of James and Mary Fowler. By 1901 the family had moved back to the UK, settling in Albert Gate, Westminster. James Fowler had established a business as a merchant grocer and was clearly a man of means, as his household included four domestic servants. Mary passed away in November 1915; at that time she and James were residing at Redcourt Peck-Crescent on Wimbledon Common.

David was educated at The Wick, a prep school in Hove, before attending Harrow where he was a member of the Officer Training Corps. He completed his education at Trinity College, Cambridge. Contemporary records describe him as weighing about 159 lbs and being of Australian and Scottish descent.

During the First World War David joined the Royal Flying Corps – then the air arm of the British army. He was appointed as 2nd Lieutenant on 15 March, 1916 and became a flying officer on 18 July that year. On 6 October 1916, whilst on active service in Salonica, northern Greece, he sustained injuries to his foot and ankle, having been shot whilst on a flying mission. Although no bones were fractured, the injury caused him problems for the rest of his life.

David briefly returned to active service, but after frequent hospital visits was invalidated back to England in December 1916. It is a bitter irony that having survived military service as a pilot, where life expectancy was often short, he was killed during an air raid in Brighton in March 1917. He is buried at St.Margaret’s Churchyard, Rottingdean and commemorated at Wimbledon Parish Church.