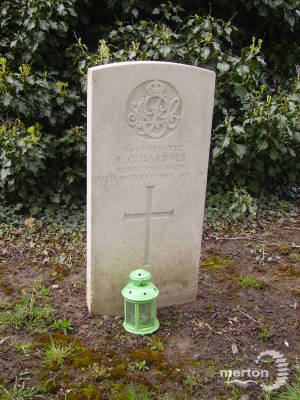 Randal was born in Wimbledon in 1879 and baptised on 1 August, 1879 at Holy Trinity Church. His parents were local bailiff Herman Gardner and his wife Sarah. The couple, who were then living at 126 Pelham Road, also had two older children, Francis and Emily.

It appears that Herman Gardner died before his youngest son reached the age of 12. Certainly by 1891, Randal’s mother, Sarah, was supporting herself and her family by working as a matron (possibly in a hospital or school). They were then living at 7 Herbert Road with Emily, Francis and his wife, Kitty, plus a lodger. By this stage Randal’s brother was working as a Post Office Clerk and his sister was employed as a school governess.

During the First World War Randall enlisted at Whitehall and served with the Eastern Command of the Army Pay Corps. This unit was responsible for administering the finances of the British army, from wages to accountancy. In addition to home-based administration, members of the Pay Corps travelled overseas with military units on active service. Some recruits also served as part of British coastal defences and anti-aircraft units. Randal may not have had a front line post but is likely to have been based at unit headquarters. Having nearly survived the war, he died at home just one month before the Armistice.

At the time of Randal’s death his mother and sister were still living in Wimbledon at 124 Graham Road. He is buried in a Commonwealth War Grave at Gap Road Cemetery.