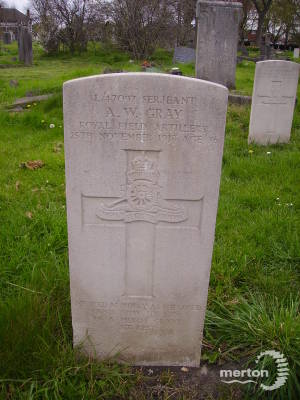 Born in Boscombe, Hampshire in 1882, Albert was the son of blacksmith, Colin Gray and his wife Selina. He had an older brother, Colin Bertie and a younger sister, Laura. In 1891 the family were living in Victoria Road, Pokesdown, where they also took in a lodger. They later moved to Hannington Road, Bournemouth. By 1901 Albert’s brother was working as a decorator, whilst his sister was employed as a laundress and later as a dye cleaner in the textile industry.

Albert seems to have followed a similar career path to his sister. By the age of 29 he was a wash house foreman, in a local laundry. This is probably where he met his future bride, Gertrude Harradine. The daughter of a railwayman, she was originally from 104 Palmerston Road, Wimbledon but was boarding in Bournemouth, having found work as a laundress. The couple married at Holy Trinity Church, Wimbledon on 3 August, 1912.

During the war, Albert joined the Royal Field Artillery. He served with the 189th Brigade, part of the 41st Division. This was formed in Aldershot in 1915 from units raised in southern England. Comprising 3 – 4 gun batteries, the brigade was sent to France in May 1916 and was initially based in the area between Hazebrouck and Bailleul. As field artillery for the 1st Army, Albert and his comrades would have fought in the Battle of Flers-Courcelette. During this week-long offensive in September 1916, artillery and infantry tried, but failed to break the German line and leave an opening for cavalry attacks. In November the 189th brigade was also involved in the Battle of the Transloy Ridge, part of the third and final offensive of the Somme campaign. Fighting was made all the more harrowing by terrible weather conditions and a battlefield devastated by months of artillery fire.

Promoted to the rank of sergeant, Albert must have shown bravery and determination during his military service, as he was mentioned in dispatches. He survived the war, albeit briefly and died of influenza on 25 November 1918, just two weeks after peace was declared. He was buried at Gap Road Cemetery and is commemorated at Wimbledon Parish Church. His widow continued to live at 28a Wycliffe Road, Wimbledon, after his death.