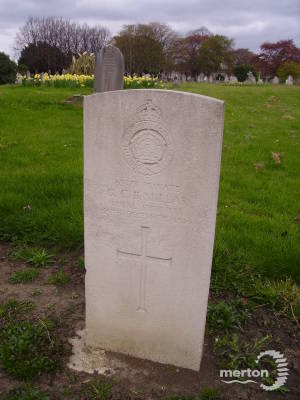 George was born in Chelsea around 1877 to George and Eugenie M Millar. His father worked as an upholsterer’s clerk, and later as a furniture salesman. He had two older brothers, Sidney (who became a merchant’s clerk) and William, two younger brothers, Reginald and Charles, an older sister, Rosa, and a younger sister called Eugenie who appears to have died as a child. The family moved from Homerton Road in Lambeth to Franconia Road in Clapham to Louisville Road in Streatham. George lived at home well through his 20s, working as a merchant’s clerk.

George married a woman called Marian around 1907, and moved to a five room house at 21 Evelyn Road with her, taking a job as a senior clerk in commercial education for the London Chamber of Commerce.

He enlisted in July 1915, and died on Christmas Day, 1916, apparently at home, as he is buried in Wimbledon’s Gap Road Cemetery.