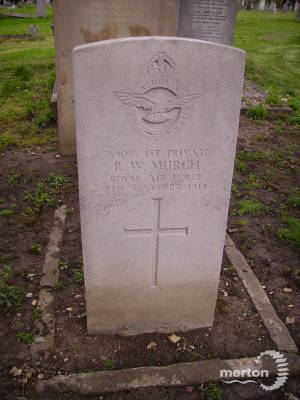 Reginald was born around 1897 and baptised at Wimbledon Parish Church on the 30 January, 1898. His parents were William George and Mary Anne Murch, and they resided at 2 Tabor Grove. His father was a fishmonger, and Reginald was an only child.
By 1911, the family had moved to a 5 room house at 12 the Ridgway.

Reginald served at the RAF Airship Station in Howden, which was responsible for sending airships on submarine patrols around the coast. He died in hospital in Hull.