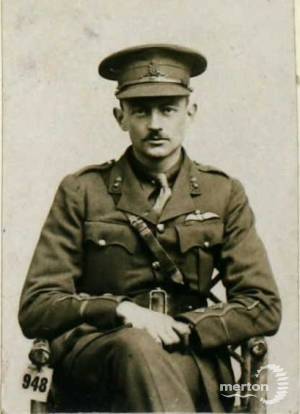 Born in Mitcham on 25 July, 1893, George was the son of barrister Henry Weston and his wife, Bertha Devenish. The couple also had three other children – an older daughter, also called Bertha, plus a younger son and daughter, Henry and Anna. The family lived at Hillfield, Mitcham, a 17 room house built in 1863 by Samuel Bidder. (The house was demolished during the 1930s, to make room for a housing estate on what is now Hillfield Avenue.)

Between 1907 and 1911, George attended Charterhouse, a prestigious private school in Surrey. There he joined the Officer Training Corps, eventually attaining the rank of sergeant. When war broke out in August 1914, George initially joined the Royal Field Artillery, serving as a 2nd Lieutenant in the 29th Brigade. His unit was sent to France as part of the British Expeditionary Force and whilst on active service, George rose to the rank of Lieutenant. He was wounded in action on 28 October, 1914, and spent some months recuperating from his injuries before returning to France in June 1915.

In April 1916, George answered the call for artillery officers to transfer to the Royal Flying Corps as observers. He spent the next four months flying as an observer in France before returning to England for training as a pilot at Brooklands, Surrey. He received his aviator’s certificate on the 26 September, 1916, and subsequently joined the 35th squadron of the Royal Flying Corps – this was a reconnaissance squadron that served at the Battle of Arras (9 April – 16 May, 1917).

George was killed in action at Le Catelet on 6 June, 1917. Having been attacked by a number of German aircraft, his plane went down in flames on the other side of the German line and George was presumed dead. His body was never recovered. Records show that he left £1994 in assets. George is commemorated on the Arras Flying Services Memorial in the Faubourg-d'Amiens Cemetery, France. His name also appears on the Mitcham War Memorial on Lower Green West.