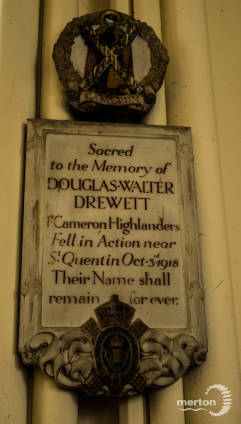 Douglas was born in Mitcham in 1883 and baptised at the local parish church on 7 October that year. He was the eldest child of James and Bridget Drewett. The couple had five other children – three sons, Donald, James and Alfred, plus two daughters, Mary and Helen.

James Drewett senior came from an established Mitcham family and was well known both as a local builder, and a parish councillor. The family lived at Vine Cottage, Commonside East, before transferring to Ravensbury, a large mock Tudor property built on Upper Green, Mitcham c. 1900. This stood near what is now the entrance to the pedestrian precinct and Majestic Way.

Douglas married Margaret Mizen in 1908. She is thought to have been related to another leading Mitcham family, with a successful market-gardening business in the Eastfields area. The young couple set up home at Elm Gardens near London Road, Mitcham and had a son, named James Douglas Drewett, in 1910. By this stage Douglas was following in his father’s footsteps and had become a builder in his own right.

Following the outbreak of war, Douglas enlisted as a private in the 1st Battalion, Cameron Highlanders and his unit was sent to France. Following the Battle of Arras (9 April – 16 May, 1917) a Mitcham newspaper reprinted one of the letters sent by Douglas to his family. This referred to a group of German troops who had been asleep in a dugout during the attack and came out surrendering when discovered by British soldiers.

Having fought through much of the war, it is particularly tragic that Douglas was killed in action on 3 October 1918, less than six weeks before the Armistice. He is buried at the Grand Seraucourt British Cemetery near St. Quentin in the Aisne region of France. His name also appears on a memorial plaque at Mitcham Parish Church.